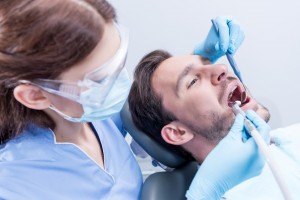 Over 42% of Americans over the age of 30 who still have at least one tooth also have some form of periodontal disease. While gum disease is often just blown off in today’s society with the promise to brush more often or eat less sugar, there’s often far more to the condition. The truth is, gum disease is categorized into three stages and only the earliest stage of gingivitis is easily treated and reversed primarily by stabilizing or improving home dental habits. Undiagnosed or ignored, periodontal disease spreads rapidly and can lead to edentulism and several bodily diseases including cardiovascular disease and diabetes. Fortunately, if caught quickly enough your Fort Lauderdale Dentist can treat and reverse the condition. But what are some obvious warning signs of gum disease?

Gum tenderness or mouth soreness can occur for a number of reasons including eating or drinking acidic items, sports injuries, or even simply brushing your teeth too hard. But if your gums are regularly inflamed or bleed often, it’s usually a sign that bacteria has built up beneath your gums. This is especially the case if your gums are sore or bleed often while brushing your teeth. Sore, inflamed, and bleeding gums are usually the first signs of gingivitis–the first stage of periodontal (or gum) disease. Brushing harder isn’t the cure, but brushing smarter is. Your Fort Lauderdale Holistic Dentist can help stop and reverse the disease easily at this point.

Sudden or consistent tooth sensitivity is also a sign of gum disease, especially moderate-to-advanced stages. Tooth sensitivity may simply be due to weakened enamel and temperature changes due to cold or hot food or drinks. But if it’s an ongoing situation or gets worse, look deeper. Your teeth may be cracked, allowing bacteria to slip inside and eat away at the dentin or your gums may be receding and exposing tooth roots. Exposed roots allow bacteria to burrow inside the gums easier and attack the teeth at the roots where they’re most sensitive. The results can include discomfort, pain, sinus problems, headaches, and tooth damage or loose teeth. Your Fort Lauderdale Holistic Dentist should be contacted as soon as the sensitivity issues are discovered to diagnose the problem and begin necessary treatment.

Gum recession tends to be an indicator of age and can be brought on by vices such as smoking or making poor dietary choices. But it’s also a major sign of advanced gum disease or periodontitis. The advanced stage of gum disease can also provide signs of gum pockets. These pockets are actual spaces between the gum tissue and the teeth. The pockets allow bacteria to invade, thrive, and breed while decaying the teeth and gums further. Infections occur regularly at this point and the gums may continually bleed or fill with abscess-like puss. Even if you can’t personally see the pockets, they may still be present and even cause tooth loss. Your Fort Lauderdale Holistic Dentist can easily determine the stage of gum disease, either reverse it completely or treat it to stop it in its tracks and discover and potentially reverse any other issues simultaneously.